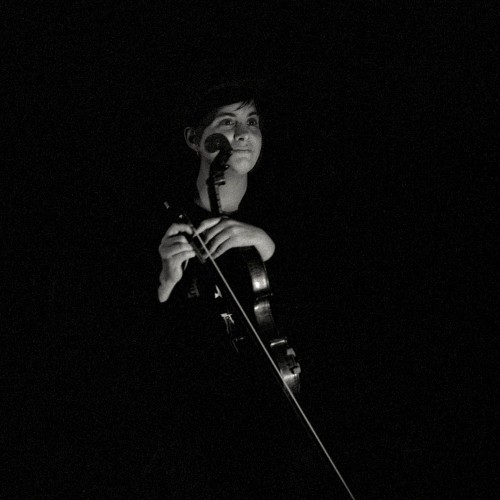 Katt Hernandez moved to Stockholm in 2010, where she rapidly began performing and recording with many artists. In addition to her solo work on the violin, she co-founded the electro-acoustic ensemble The Schematics, joined Fredrik Ljungkvists 10-piece group Yun Kan 10, and has worked with many other musicians and artists since her arrival in Europe, including Daniel M Karlsson, Burkhardt Beins, Julia Strzalek, Wolfgang Lehman, Joel Grip, Niklas Barnö, Mats Erlandsson, Gus Loxbo, Henrik Olsson, Finn Loxbo, Isak Hedtjärn, Audrey Chen, Lisa Ullén and many others. She can regularly be found playing at festivals and venues in Stockholm and beyond. Katt began recording and composing at Stockholm’s Electronic Music Studio in 2008, and in 2014 earned a Masters degree in Electroacoustic Composition from KMH. She also worked for four years as a producer at Fylkingen, where she worked on programming and producing the Bucky Dome at Moderna Museet, the 80 year jubileum festival, Sound of Stockholm and many other events. She was also head of the board for FRIM after working with the organization for four years. Now, in addition to continuing as an active performer of improvised music in Sweden and Europe, she is one of the artistic researchers in Klas Nevrin’s “Music in Disorder” project, and has embarked on a PhD program in Music at Lund university, where her projects take the form of electroacoustic compositions, installations and work with organs and mechanical string instruments. Her work “Sånger för Spökkvarteren, Stockholm” was premiered recently at Audiorama and then featured on Elektroniskt i P2, and she has also created multi-channel and site-specific works for Norberg Festival, HagenExtensions and Intonal Festival

Before leaving the U.S., Katt was a 13 year veteran of the new, improvised and experimental music scenes in Boston, Philadelphia, Baltimore, and New York, both as a performer and an organizer. She has performed and recorded with a vast array of musicians, dancers, visual artists, puppeteers, film makers and performance artists such as Joe Maneri, Joe Morris, Jonathan Vincent, Alyssa Cardone, Gordon Beeferman, Evan Lipson, Walter Wright, Saul Levine, Erik Ruin, John Berndt, Matt Samolis, Daniel Blacksberg, Gene Coleman, Zack Fuller, Erik Ruin, Andrew Neumann and many others in venues ranging from underground urban art spaces to festivals and series dedicated to new music to ivy league concert halls to the streets.